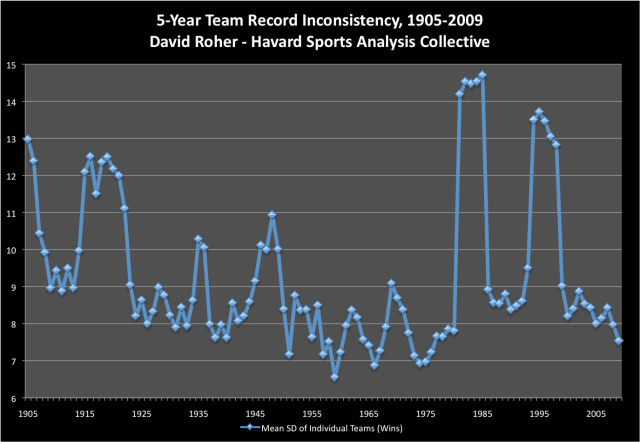 Once again, I hope you can come to your own interesting conclusions in the comments, but here are some things I noticed:

– Unlike the previous graph, there’s no relationship between parity and the progression of time over the course of baseball history. When you remove the 5-year spikes (more on those later), the values are fairly consistent.

– That said, it does look like there was a definite increase at the start of the 1980s (spike aside). This corresponds roughly with free agency taking hold (the ruling granting it was in 1975). Not enough evidence to say anything conclusive, but the potential implications are interesting. Today, we connect free agency with uneven spending. But an equally important result is the more free flow of players from one team to another, a factor which would definitely increase variance in wins over a 5-year period.

– Here’s what I found most interesting: the location of those three spikes. They started in 1915, 1981, and 1994. Those last two years immediately rang a bell: they were the same years as the largest two work stoppages in baseball history. There was another labor relations problem in 1915: that was the year that the Federal League, the last third major baseball league, folded, resulting in a couple teams being merged into the AL and NL. Presumably, there was also a flood of players from the now-defunct league looking for jobs in the two still existing ones. As a result, the 1915 spike makes sense. But there was no inherent player movement in the ’81 and ’94 strikes – rather, it was more indirect. The damage done by the strikes likely caused teams to reevaluate their financial standing.

3 Responses to A History of MLB Parity, Part 2: Labor Relations