Should Pitt Have Pulled a Westbrook? Does Brian Kelly Play Madden? 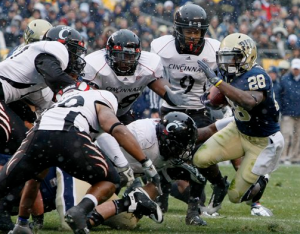 It certainly looks like Cincinnati is trying to tackle Dion Lewis (28) in this photo. Courtesy AP

Today’s de facto Big East Championship between Pittsburgh and Cincinnati provides us here at HSAC another chance to analyze some interesting late game coaching strategy.  Today, we will take a look at Cincinnati’s Madden-like decision to (seemingly) lie down on defense at the end of Pitt’s penultimate drive.

Cincinnati trailed most of the game, down 31-10 in the first half.  With a stout second half defense and the awakening of their offense, the Bearcats tied the score at 38 on a rushing touchdown and two-point conversion in the fourth quarter.  Pitt took the ball with 5:46 at their own 33.  Using a combination of clock eating runs, a key pass, and a costly Cincinnati personal foul, Pitt brought the ball to the Cincinnati 29 with 2:44.  Cincinnati used their first timeout to stop the clock on 3rd and 9.  The Panthers picked up a key first down to keep their drive going downfield.  On 1st and 10 at the Cincinnati 13, the Panthers ran the ball to the Cincinnati 5.

On 2nd and 2, the Bearcats defense seemingly lied down and let Dion Lewis run into the end-zone, practically untouched.  With the touchdown and botched extra point, the Panthers took a 44-38 lead with 1:36 remaining and the Bearcats poised to receive the ball with two timeouts.  Assuming they meant to allow Lewis get the TD, did Cincinnati make the right move?  Should Pitt have counteracted it by kneeling at the one like Brian Westbrook famously did in 2007?

By allowing Pitt to score, Cincinnati maintained both their timeouts and 1:36 on the clock.  If Lewis had kneeled at the one yard line and then the Panthers took two knees, they would have forced Cincinnati to burn both their remaining timeouts and would have reached 4th down on the one yard line with roughly 0:50 remaining (1:36 on first down, 1:33 on second down, 1:30 on third down, and then a 40 second run-off).  If they opted for the field goal and made the chip-shot—not necessarily a given considering they missed an extra-point—that would have given Cincinnati the ball with under 50 seconds, down by three with no timeouts.  So which situation is better?

Unfortunately, the data for college football is not as readily available as it is for the NFL, but using Brian Burke’s terrific site, Advanced NFL Stats, we can come up with some numbers to start our discussion.  Assuming they start on their own 20, the NFL numbers indicate that Cincinnati would have a .07 chance of winning if down by three with 50 seconds remaining; down by six with 1:36 remaining, the chance of winning would be .19.  However, this is a little too nice to the Madden strategy since they should have assumed the extra point would be good.  If they were down by 7 with 1:36 remaining, the chance of victory drops to .06.  This is curious since it should be roughly 50% of the chance of victory if down by six (both require a touchdown, one gets a win the other goes to overtime).  These projections are for the NFL and timeouts are not a factor.  Adding the timeout advantage to the Madden strategy would make it a better bet.  Yes, touchdowns are tough to come by, but as Les Miles discovered a couple weeks ago, field goals are tough without timeouts.

I would take my chances with the Madden strategy (or kneel if I were Pitt).  1:36 and two timeouts with an explosive offense like Cincinnati seems better than just 50 seconds and no timeouts, even though the latter situation requires just a field goal.

One other complicating factor is the weather.  The snow was swirling and both teams had already missed extra points (Pitt with a botched snap/hold and Cincinnati with a kick off an upright).

An advantage to Pitt’s play—calling it a strategy may be a bit strong since it may have been instinct alone that led Lewis into the end-zone—is that it (should have) made a regulation loss very unlikely.  If they had run the clock and taken a field gold, they could have lost to a Cincinnati touchdown.  Ultimately, missing the extra point meant that this very situation did happen, however that occurrence was very unlikely.  Since coaches are generally risk averse, it is likely most would have decided to make exactly the choice that Lewis did by running for the touchdown.

Few players have the wherewithal and self-control to make the decision to not score an easy touchdown.  In this case, the decision would not have been unequivocally correct.  In the case of Maurice Jones-Drew’s kneel-down this year, I saw an ESPN pundit claim it was a bad choice because (to paraphrase): you should score whenever possible and let the defense handle the rest.  Brilliant.

If there is anything we stat people have learned from the Belichick 4th down debate, it is that unsuccessful unconventional decisions are treated with extreme skepticism, even if the numbers support the decision. Pitt coach Dave Wannstedt and running back Dion Lewis should feel lucky that they lost in the conventional manner rather than an unorthodox way.  If Pitt had lost after a kneel-down, the press would have skewered Pitt’s mustachioed maestro.  For Cincinnati coach Brian Kelly, it was a good and gutsy decision…the type of decision they enjoy in South Bend.  There’s also a very large chance I am giving Kelly too much credit and the easy touchdown was just a result of a poor defense that allowed 36 points to a 3-9 Illinois team last week.

5 Responses to Should Pitt Have Pulled a Westbrook? Does Brian Kelly Play Madden?