Momentum in College Basketball: Do Late Rallies Carry Over to Overtime?

DeMarcus Cousins beat the buzzer to send UK to overtime in the SEC Title Game, but did momentum carry over?

Of all the sports announcer’s tropes and standards, the concept of momentum may be the most often used and least well understood.

Momentum is frequently cited as an important factor in deciding the outcome of games, but it is very difficult to quantify in meaningful ways. In fact, studies of momentum have sometimes seemed to disprove the conventional wisdom about momentum. Amos Tversky, for instance, famously deemed the concept of the “hot shooting hand” in basketball a fallacy in his well-known paper. While I have several problems with that study and its implications (saved for another time), it is instructive in showing us that we should not take our belief in momentum on faith.

For my part, I decided to study the potential role of momentum going into overtime in college basketball games. When a team ties the game on their last possession to send the game to overtime, announcers often talk about the “momentum” that that team carries into the extra period. We might call it the rally effect. On the surface, this makes sense: a team that rallies for the tie should be buoyant with the new opportunity to win the game, while a team that just gave up the lead might hang its head going into the extra period. If a team does have some real momentum conferred from hitting a last-possession three-pointer, we would expect them to win the overtime period more often than they otherwise would. By looking at these cases, we can test this instance of momentum in college basketball.

To determine how often a team is expected to win going into overtime, I used Ken Pomeroy’s awesome win probability graphs, which gave me the win odds for the team at the start of the OT period (rounded to the nearest integer). I also used my own previously compiled database of every close college basketball game from the 2009-2010 season, and found that there were 174 instances where a team scored on its final possession to send the game to overtime. Those 174 observations were used in my study. 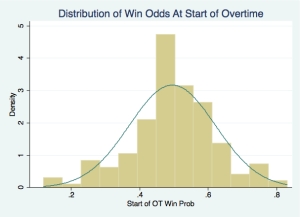 Above is the distribution of expected win odds for those 174 games. This distribution makes sense, as more overtime games will be played between relatively even teams than the normal distribution approximation would suggest. The highest win odds for a rallying team at the start of overtime? Wisconsin over Penn State (83 percent). The lowest were Delaware over Virginia Tech (13 percent).

To test for the presence of momentum, I used the expected win odds and actual outcomes to create a binomial distribution (assuming all games are independent of one another). I summed the expected win odds to get the total number of expected wins for rallying teams, and summed the actual results. Rallying teams were expected to win 86 games out of 174, or a winning percentage of 0.495. They actually won only 78 games (a winning percentage of 0.448).  Using a z-test for proportions, and assuming the conservative variance of p(1-p)=.25, I found that there was no significant difference between expected and actual performance for teams subject to the rally effect.

What does this mean? It is important to remember that the failure to observe an effect does not mean that it does not exist. Also, the difference between the actual and expected number of wins was not significant, so the fact that the difference was negative could easily be random chance. Nevertheless, the conclusion still remains that “rallying” teams do not win significantly more often than they are expected to. It seems hard to suggest that the momentum of rallying for the tie has any quantifiable effect on the outcome of the game.

One last word: as I understand it, Ken’s win probability formula takes into account the time, the score, and the previous performances of the two teams (including game location). It does not, however, appear to account for potentially vital in-game changes, like a star player fouling out or an injury. It may be that these omitted variables are clouding the rally effect. Also, I must point out that the results of a five minute overtime period are fairly random. There may just be too much noise in the data for the rally effect signal to come through. This seems like a good topic for future study.

For now, however, the next time you watch a team hit a tying shot at the end of regulation and hear an announcer talk about momentum, remember that it likely does not carry over into the extra session.

This entry was posted in NCAA Basketball and tagged College Basketball, Momentum. Bookmark the permalink.

24 Responses to Momentum in College Basketball: Do Late Rallies Carry Over to Overtime?