By Chris Bruce and John Ezekowitz

Last week we debuted our BCS prediction model, using it to predict what would happen in the BCS rankings under certain scenarios for the week’s games. Turns out there wasn’t too much chaos as all the favorites at the top of the rankings won, but that doesn’t mean we won’t see some interesting scenarios play out this weekend. Below we let you know how the race for the BCS championship will likely play out depending on the results of the SEC Championship between LSU and Georgia and the Bedlam between Oklahoma and Oklahoma State. For each scenario we show the probability that it will occur, according to TeamRankings predictions, in parentheses. 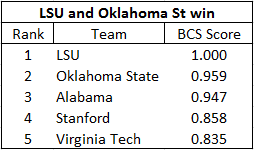 Despite all the talk about an LSU-Alabama rematch in the BCS Championship, our model predicts that Oklahoma State will actually leapfrog Alabama if they win this weekend. (While we predict Oklahoma State will be ahead of Bama, the two teams had overlapping confidence intervals in our model – meaning that we can’t predict this result with high confidence). This result is at odds with what we predicted last week because Alabama’s BCS score dropped further than expected, despite beating Auburn handily. That drop put Oklahoma State within striking distance for a shot at the National Championship game. Potentially, the voters were already showing a little bias against an LSU-Alabama rematch and docking Bama accordingly. Oklahoma State still has quite a bit of room to move up in the polls, but to overtake Alabama they’ll need to beat them in the computers as well. Given that 5 of the 6 BCS computer rankings had Oklahoma in the top 6, a victory over Oklahoma would likely do the trick. 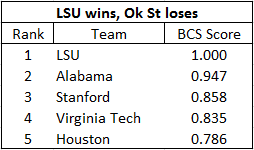 The most straightforward scenario. Oklahoma State drops out of contention, Virginia Tech is too far out of the running to reach the top two, and both Alabama and Stanford are sitting at home, resulting in an LSU-Alabama rematch and hours of mindnumbing debate on whether it should be allowed, whether every game counts and if there should be a college football playoff. 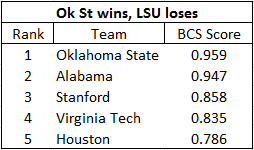 If you watched the LSU-Arkansas game last week, you heard the announcers talking endlessly about how Les Miles was sticking it to Bobby Petrino in the second half, running up the score in an attempt to posture himself such that he would still make the BCS Championship even if he lost to Georgia this week. Well, maybe he just doesn’t like Bobby Petrino very much, because those extra touchdowns may not do him any good if he loses – Bama and Oklahoma State will likely end up in the championship, and LSU might not even break the top 5. That said, it should be mentioned that a unanimous BCS #1 has lost in a conference championship and still made the BCS title game – Oklahoma lost to #10 Kansas State in 2003. Our data set does not go back that far (because the BCS formulation changed in 2004), but suffice to say, it is possible that this rare situation may not be accurately reflected in our data set, and therefore by our model. 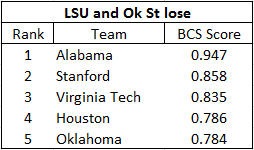 For all of you Stanford fans that have been sticking around hoping to see some good news, I’m happy to tell you that there’s still a chance. If both LSU and Oklahoma State lose this weekend, Stanford will likely slip into the title game against Alabama. Unfortunately for Virginia Tech, Clemson’s recent fall in the rankings killed their chances to make a move for the top two spots.

So, despite all the talk of a rematch in the BCS this year, it’s looking pretty likely that we’ll see some shuffling in the top spots before all is said and done. Enjoy the games this weekend.

This entry was posted in NCAA Football. Bookmark the permalink.