Belichick and Brady Address the Media: A Statistical Report

by Ben Blatt and Andrew Mooney

Bill Belichick and the postgame podium are notorious for being a lethally boring tandem. Week after week, he stymies reporters with concise non-answers, vague summaries, and robotic praise of players, giving them nothing of substance to write about his team.

Belichick’s public persona may be as inscrutable as his gameplans, but that doesn’t mean we can’t try to break it down, as he would do to an opposing offense. To get a more in-depth look at the man, we analyzed Belichick’s speaking patterns from the transcripts of his post-game press conferences this season and, for purposes of comparison, gave the same treatment to the more media-friendly Tom Brady.

We started by looking at how long each of them is willing to stand in front of the podium. There’s actually not much variation between the two; Belichick answers questions with an average of 72 words, whereas Brady’s answers average 60 words. However, the difference in the two personalities becomes apparent when we split these averages up by wins and losses. Brady’s answer length barely changes; after a win, his average response length is 59 words, as compared to 62 words following a loss. Belichick is quite a bit less eager to talk to the media after a defeat. Though he averages 82-word answers following a win, he cuts his responses to an average of 25 words after a loss, less than one-third of his post-victory average.

We also examined the word frequencies for each speaker. Of course, the most commonly used words were ordinary ones like ‘a’, ‘the’, and ‘it’. It is more interesting to look at which words had the largest difference in frequency between the two (i.e. which words had the greatest ratio difference between two). Below are the top ten words used most commonly by Belichick and Brady in proportion to one another. (Note: words used less than three times by any one of the speakers were not counted.) 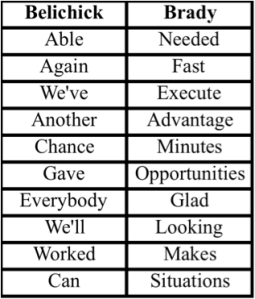 Unsurprisingly, the results for Belichick include a list of profoundly uninteresting words, matching his style at the podium. And Brady, though his list includes a few more syllables, isn’t conveying much more meaning; “We gave them another chance” tells me just as much (or little) as “We didn’t take advantage of our opportunities.”

We also wondered if it was possible to determine the speaker at each press conference just by the style of their speech, examining the frequency of the various words used. Statistician Frederick Mostellar famously used this method to ascertain if Alexander Hamilton, James Madison, or John Jay was the author of the articles of the anonymously published Federalist Papers. At HSAC, we also used it last year to determine the authorship of sports articles, based on individual writing styles. Using these same probabilistic methods, we randomly selected four post-game press conferences (Brady’s and Belichick’s post-game press conferences from last season’s victory over the Packers and loss to the Browns) and tested the question: can a set of equations detect the true speaker?

The answer is a solid affirmative. The model works by producing a probability that a given set of words belongs to either Brady or Belichick, given the speaking patterns analyzed above. In all four cases, the generated probabilities were lopsided (more than 99.9 percent in favor of one speaker), and in all four cases the model was correct in identifying the true speaker.

All in all, this underscores just how little can actually be learned from sports interviews, given the short, recycled nature of their content. Personally, we appreciate Belichick’s approach. The Hoodie has no intention of giving comprehensive answers to anyone’s questions, but at least he doesn’t pretend to by dragging out the same timeworn clichés heard all over the sporting world. His concern is winning football games, and the less other people know about how he does it, the better.

This entry was posted in NFL Football. Bookmark the permalink.

4 Responses to Belichick and Brady Address the Media: A Statistical Report