Nothing Has Changed About NFL Injuries

(Ed note: Huge thanks to the guys at TeamRankings for providing the dataset) 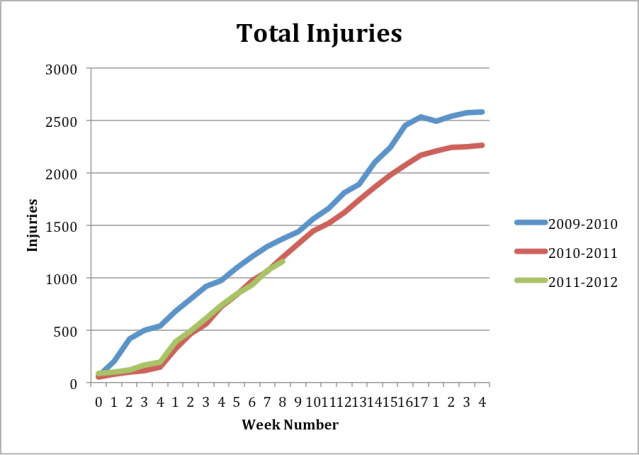 Over halfway through the NFL season, many are still discussing the perceived effects of the lockout this summer. Washington Redskin Chris Cooley recently said “I feel 100 percent that I’m a casualty for the season of the lockout… I think it was a shame that they didn’t let players who had surgery spend time with the doctors and trainers they trust on a daily basis. I wish I could’ve.”

Many have similarly wondered if Peyton Manning would have been able to play this season if he could have rehabbed with his team.  Without him, the Colts have become one of the worst teams in football, and have a legitimate shot at having the first overall pick in next April’s draft. Furthermore, with injuries piling up on fantasy football studs like Jamaal Charles, Kenny Britt, Darren McFadden, Jahvid Best, and Andre Johnson, many people are under the impression that more injuries are occurring, and that those injuries are more serious than in years past. It is almost impossible to analyze what would have happened to any one player’s injury: we’ll never really know what would have happened if Manning had rehabbed with the Colts. However, we can study if the lockout caused more injuries this season.

When compared to the last two NFL seasons, the answer is a resounding no: the lockout has not caused a significant rise or fall in injuries or injury severity. This season’s injuries are extremely similar to what has happened the past two seasons, which means that lockout has not had any effect – either positive or negative.

As the graph above demonstrates, injuries this season are almost identical to last season, and significantly below the 2009-2010 season. This trend suggests that the lockout had no effect on injuries at all.

As you can see, the current NFL season has had almost exactly the same number of injuries this season (1,154), as last season at this point (1,195), and much fewer than the 2009-2010 season (1,368). The injury rate increases at the beginning of the regular season, but then remains fairly constant from week to week until the playoffs, where the injury rate falls. Because there simply are not more injuries this year, the lockout cannot have caused more injuries. So despite a number of high-profile injuries so far this season, the majority of players have had fewer injuries at the season’s midpoint. Furthermore, in many attempts to fit a regression model to predict the total number of injuries through a certain week, the dummy variable “lockout” was consistently dropped in a reverse stepwise regression at a significance level of 0.05, meaning that the lockout happening did not explain the variance in the total number of injuries.

While the lockout did not cause any significant change in injuries, it may at first appear that the NFL’s active role in attempting to limit injuries is having an effect. Before the 2009-2010 season began, the NFL changed a number of rules to improve player safety: changing how players could block, the addition of the defenseless receiver rule, and outlawing the blocking wedge on kickoffs. Since data from the previous season is unavailable, there is no way to see what impact these rule changes had on the 2009-2010 season. However, beginning in week 3 of the 2010 season, the NFL began a crackdown on illegal hits, especially helmet-to-helmet hits and other hits to the head and neck. Given the fall in injuries from the 2009-2010 season, it may appear that these rule and policy changes have had some affect.

However, the rise in injuries that season stems from an extremely high number of injuries in weeks 2 and 3 of the preseason that year. Without the preseason, there were actually fewer injuries in the 2009-2010 season than either this year or last. So the added attention, fines, suspensions, and noise around the NFL’s efforts to limit injuries has actually reduced injuries.

While the total number of injuries is down, the severity of those injuries has risen – but not very much. In this analysis, a player listed as “probable” had a severity of 0, “questionable” equaled 1, “doubtful” was 2, “out” equaled 3, and “injured reserve” was 4. At the midpoint of the season, the average injury had a rating of 1.18 – somewhere in between questionable and doubtful. At the halfway point of the past two seasons, the average injury rated at 1.07 and 0.98. So the severity of each injury has increased a bit, but not very much. To be more concrete, in a group of 100 injured players, if 98 of them were questionable and 2 were probable, they would have an average injury rating of 0.98; for that same group to have an average injury rating of 1.18, there could be 91 questionable players and 9 players who were out. While this change is real, it is not large. Furthermore, the extreme case of a player going on injured reserve is down to 145 players, lower than it was in either of the previous two seasons (189 in 2010-2011; 151 in 2009-2010) at the midway point.

Neither the lockout nor recent rule changes and attention have had a significant effect on either the quantity or severity of injuries this NFL season. I am not arguing that Peyton Manning or Chris Cooley would be injured now even if the lockout had not happened – I love watching them both play, and wish them and every player nothing but the best as they work toward taking the field again. That said, injuries this season have been almost identical to the past two seasons. If the NFL is truly committed to lowering the injury rate, it needs to keep trying different policies until they find something that works.

This entry was posted in NFL Football. Bookmark the permalink.

5 Responses to Nothing Has Changed About NFL Injuries