The Biggest Over and Under Achievers in the NFL

The lists below are based on my previous analysis on the NFL draft using the Career Approximate Value from www.pro-football-reference.com.

Of course Tom Brady has been the highest performing pick in history. I think it’s crazy that Green Bay and Denver make up 7 of the best 10 draft picks ever. Looking through draft data by team will show whether or not those picks indicate a superior front office or just luck. It’s also interesting that no player selected before the 150th overall pick is here, but that should be expected given that projections for late round picks are so much lower than the expected value of higher round picks. 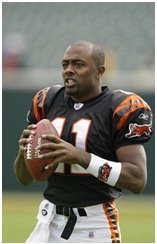 To be clear, these data mean that Akili Smith provided 1.6% of the expected value of a 3rd overall pick. That’s just horrendously terrible. He was almost twice as bad as Ryan Leaf. No other player in history has performed below 2% of his expected value. A singular talent, that Akili Smith. The 1997-9 drafts should not be proud to represent over half of the worst picks in NFL history.

The Most Overachieving Top 10 Picks 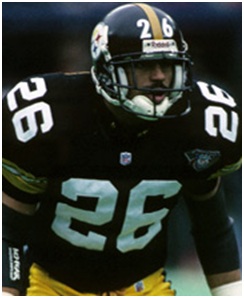 I think it’s amazing that there are three active players in the top 11 here. No surprise that Peyton Manning is the only first overall pick close to the top 10. The relatively low CAV/Expected CAV really demonstrates the different expectations of a top 10 pick from the rest of the draft, especially compared to the biggest overachievers in history.

The Most Underachieving Top 10 Picks 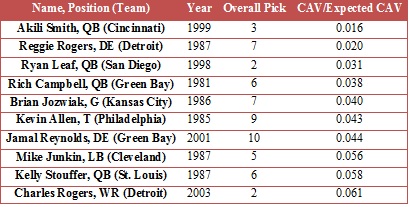 Honoree Mention in 14th place is JaMarcus Russel who was the first overall pick and has a CAV/Expected CAV of .094.

Hard to believe JaMarcus comes in at #14… or that he was almost six times better than Akili Smith. The fact that Mike Junkin and Kelly Stouffer were back-to-back historically awful picks is endlessly entertaining. I wonder if there has ever been a worse series of picks in any professional draft. (Edit: As commenters have pointed out, Reggie Rogers was picked directly after Junkin and Stouffer. This makes the series even more remarkable.) 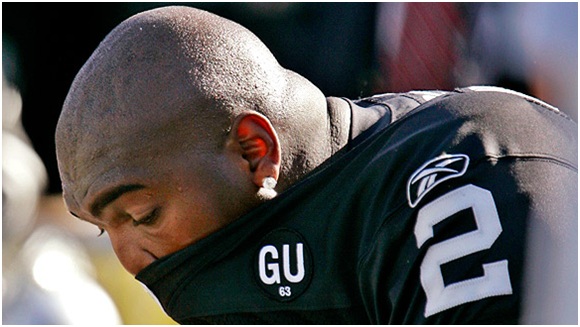 This entry was posted in NFL Football and tagged Draft, NFL Draft. Bookmark the permalink.