Posted on May 2, 2012 by harvardsportsanalysis

A new phenomenon is just starting to become apparent in the High School basketball circuit – the number of NBA hopefuls that are named Shaquille. Perhaps the most notable of the bunch is Shaquille Johnson, the highflying Senior out of Alpharetta, Georgia.

In 2012, the most common age for people named Shaquille is 18 years old. That’s right, there are about to be a lot more Shaqs. They may not grow up to be as outgoing as the original Shaq-Daddy, but a large number of babies started being named Shaquille in the early 90’s as Shaquille O’Neal first started making it big in the NBA. Using name statistics available through WolframAlpha, let’s take a walk through the Big Diesel’s career and look for some trends in baby names. 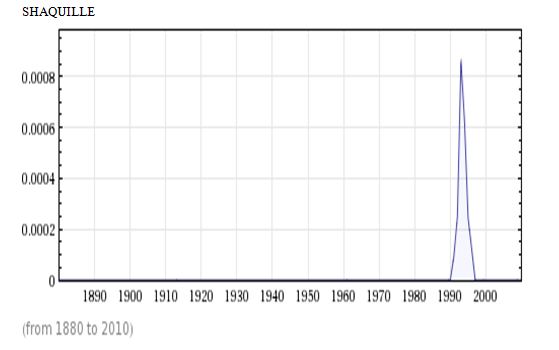 Here is a graph of all people named Shaquille in the last century. Up until 1990, there were no stats available for people named Shaquille, because the name wasn’t popular enough. The name first pops up in 1991, as Shaquille O’Neal was developing into a star in college at LSU. There is then a sudden spike in Shaq-babies in 1993, conveniently enough, the year after Shaq was selected #1 overall in the NBA draft. The name continued to be popular the following year, after Shaq won Rookie of the Year, released his first rap album Shaq Diesel, and starred in a fantastic Pepsi commercial. The popularity of the name experienced quite a drop, however, in 1995. This is possibly because on November 8, 1994, Shaq released his second rap album, Shaq Fu: Da Return, informing the public that the first one was, in fact, not a joke. By 1997, the name Shaquille was again obsolete. Coincidentally, Kazaam had come out in July of 1996. 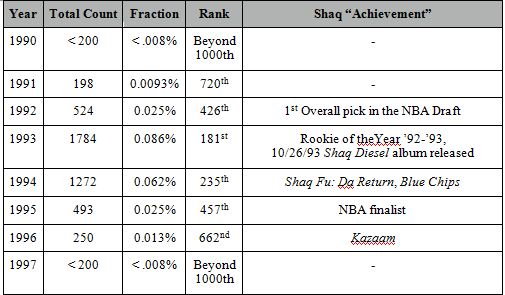 But why didn’t the popularity of Shaquille’s name bounce back after he started having incredible success as a Laker? It turns out that the rapid decline in the quality of his acting was not the only thing deterring people from naming their babies after Superman. There was another baby name that was just starting to trend as Shaquille tapered off: Kobe. As you can see in the graph below, there was a noticeable shift from people being named Shaquille, to being named Kobe. The name “Kobe” likely conquered the name “Shaquille” for good because it makes a child sound like a normal human being.

Looking at the Shaquille and Kobe graphs we can observe a few key differences. Kobe had a slightly steeper ascension than Shaquille, probably because he didn’t gain popularity through college as Shaq did. A few people made little Kobes after he was drafted 13th overall and signed with Adidas, but the name Kobe nearly tripled in popularity after his successful rookie season. It continued to climb as Kobe became a superstar and won several championships. But then, alas, in 2003, Kobe Bryant was arrested for sexual assaulting a 19-year-old. My faith in humanity was restored, when the popularity of Kobe took a dive in 2004. Apparently, though, putting up 81 points against the Raptors and regaining his dominance over the league was enough for some people to forgive him, as his name started to make a comeback around 2008.

So what can we learn from all this? Well, it’s pretty clear that the public is willing to name their children after athletic superstars, or anybody famous for that matter (look at the popularity of the name Elvis in 1957, for example). The correspondence between each name’s popularity and the major accomplishments (or blunders) of the celebrity are too similar to be considered pure coincidence. In fact, whenever an NBA player with a unique name starts to become popular, that player’s name comes out of the woodwork and is bestowed to lucky babies across the nation (a la Anfernee “Penny” Hardaway and Latrell Sprewell). Be on the lookout for a few more LeBrons entering the draft in 2021.

This entry was posted in Menu. Bookmark the permalink.

11 Responses to Shaq Attack: The Rise of Babies Named ‘Shaquille’